Stage Manager will change how multiple app windows are handled on macOS Ventura, but there are third-party apps that are currently doing a lot.

It says a lot about Mac users and our messy desktops when the standout feature of the new macOS Ventura is a way to make them more organized. And it says a lot about how difficult it is to get this organization up and running that we’ve largely ignored Apple’s previous ways.

There’s reasons Apple is stopping, there’s reasons Steve Jobs gave it a full five minutes back in 2003. That’s when the oddly named Expose was announced, the window management feature later given the more exaggerated name of Mission Control.

It’s still there, it still works, but you don’t use it much now and you’ll use it less once Stage Manager is released. But without trying to emulate Stage Manager, you can now use several different apps, each offering a way to control your windows.

So they can hide and show specific app windows at will, rearrange them and help you switch between them. It’s switching between apps that you most want to do. They want to know that you’re going to go to the specific app that you want.

And that’s perhaps why Mission Control isn’t the top of the line Mac features. While you can use it to see all your open app windows, you can also press Command-Tab to switch between apps.

Hold Command, press Tab, then hold Command and you’ll get a strip of apps. All your open apps in a row, and every time you tap the Tab key you switch between them.

The sheer speed and certainty that you’re going to the app you want detracts from Mission Control’s benefits.

But Command-Tab moves you through the clutter of your windows, it doesn’t help you organize them. And there are not only effective apps for this, but also free and inexpensive ones – including a solution from Apple.

Use shortcuts for window management

Apple’s Shortcuts for Mac lets you control your windows, although it’s a matter of required assembly. Start shortcuts, start a new one and type in the search box window.

This returns you with the following options:

Resizing and moving are perhaps the most handy, where you can just choose to move the current frontmost window to the left half of the screen. Or right or up and so on.

You can also specify coordinates to arrange windows exactly how you want them.

The problem is that creating a shortcut to move or resize a window is surprisingly difficult. It’s common for the shortcut to look correct but not do anything because you didn’t pass it the correct information.

Plus, before you dive deep into that, there’s this as well. The coordinates that line up your windows just right on your MacBook Pro aren’t correct when you connect the same machine to a desktop monitor

There are many window management apps that are not device dependent that you can just use right out of the box on any of your Macs. And then there are apps that are mainly built for other purposes – but they can do all that too.

The most well-known of these apps is Moom, which costs $10 either on the Mac App Store or directly from the developer’s website. Moom does nothing but move and resize windows whenever you want.

It builds on Apple’s traffic light icons in Finder windows. After installing and restarting your Mac, open Moom’s basic settings with your mouse over the green light icon. 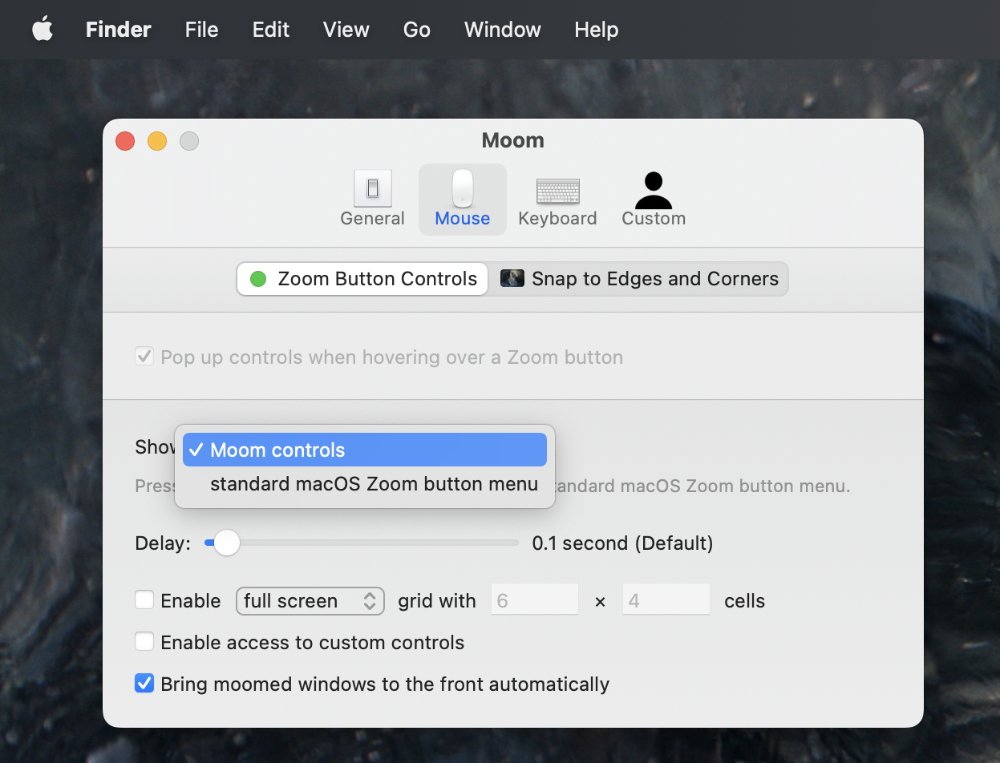 With one click, you can now resize a window to occupy the left or right half of the screen, or the top or bottom half.

Apple added some of these to macOS, most notably the left and right options, making Moom less useful in theory. But in practice, you can configure Moom to have much finer controls, which you then use via keyboard shortcuts.

Mosaic is a much more visual move and resize tool for the Mac. By default, Mosaic displays a dashboard with general configurations each time you drag a window.

Continue dragging the window until your mouse pointer is over one of the configuration options. When a particular segment has turned blue, stop dragging – and then the window will move and resize accordingly.

Drag a window and Mosaic will show you graphical placement options

You can create your own combinations of configurations or even groups of them. You also decide which ones to show in this dashboard-like display.

Seeing the dashboard every time you move an app’s window is distracting. But you can have it so that the only way to get these mosaic tools is to hold down the Option key and drag the window.

Mosaic starts at $12.99 directly from the developer. This gives you one license for use on just one Mac, while there’s the most expensive professional version, which allows up to five devices.

However, Mosaic is also available on Setapp. If you pay for Setapp’s multi-device tier, you get Mosaic on all of them too.

Magnet is perhaps the simplest of the dedicated window management apps, and it’s certainly the first one to check out when moving from Windows to Mac. Its purpose is to bring window snapping to the Mac, the way a dragged window can “magnetically” stick to the sides of the display.

As with the PC, such a dragged app window not only moves to one side of the screen, it also changes its size at the same time.

Sometimes window management unexpectedly falls under the aegis of a particular utility. And then, sometimes, a utility app can be so powerful that it can seemingly do everything.

BetterTouchTool is an example of the former. It’s meant to make it easier to automate your Mac, so you can launch apps, etc. with a single specific touch on your trackpad.

A big part of controlling your Mac, however, is managing Windows, and BetterTouchTool has a particularly good approach to that. First, you position a window where you usually like it, and then tell BetterTouchTool to remember that positioning.

Then, in what the app itself calls an advanced feature, you can optionally create Snap Areas.

You designate a specific rectangular area of ​​your screen as one of these snap areas. Maybe it’s a small square to the left of your dock, maybe it’s a bar-shaped area right in the middle of your screen.

Whatever it is, you set these up and every time you drag a window, the snap areas will be highlighted. Drag the window until your cursor is in the snap area, and BetterTouchTool will then move and resize the window to a saved location.

You can of course specify to which position a specific snap area should send a window. But if you hover over it, you’ll also get a preview of where it’s going to go.

It’s nifty, well-made, and once you’ve set it up, it’s exceptionally easy to use.

There is actually a separate BetterSnapTool app by the same developer that handles this window management exclusively. But BetterTouchTool is such a powerful and far-reaching utility that you’ll buy it for Windows and then use it in countless other ways.

Plus BetterTouchTool starts at $9 on the developer’s website, so it’s a pretty absurdly cheap bargain. It is also available in Setapp.

As an example of a utility app that’s powerful enough to do it all, Keyboard Maestro doesn’t come close. The level of control this app gives you and the speed of automating so many, many elements is a reason to buy a Mac over a PC.

Get Keyboard Maestro to do one thing, and soon you’ll be using it for hundreds more

That still means it’s more fiddly than just dragging to where you want the app to remember a position. And if you use coordinates it’s the same problem again that every Mac you use will probably have different screen sizes.

Stage Manager does not block any of these apps, although Apple has separately made Moom less important. Instead, once you’ve used Stage Manager and see how productive it can be, you’ll likely find a good reason for one of these third-party options.

What they all do is help when you want to see multiple windows at once. Stage Manager only shows one at first, although you can group a few together.

With all these alternatives, you start building a system of where you want which app windows to go.

In 2003, Steve Jobs lamented how difficult window management was — though he managed to turn it into a praise for the Mac.

“We’ve made it as wonderful to use multiple apps at the same time as people do,” he said. “We have such beautiful multitasking that you can have seven, eight, nine, ten apps at once, I’m sure most of you do.”

Then he showed the result, the “mess” of what our desktops look like in the end. “We’ve all been there,” he continued, we’re all there multiple times a day.”