An Apple 1 prototype “Apple Computer A” owned by Steve Jobs will be auctioned starting today and is expected to fetch over $500,000.

Hand-soldered by Steve Wozniak in 1976, the Apple Computer A circuit board was used by Steve Jobs to demonstrate the Apple-1 to Paul Terrell, owner of The Byte Shop in Mountain View, California. The Byte Shop became the first retailer of the Apple 1 computer after Terrell ordered 50 fully assembled machines and sold them for $666.66 each.

The Apple Computer A was matched to photographs taken by Terrell in 1976 showing the prototype used. This machine is listed as machine number two in the Apple 1 registry and was considered “lost” until authenticated by Apple 1 expert Corey Cohen. 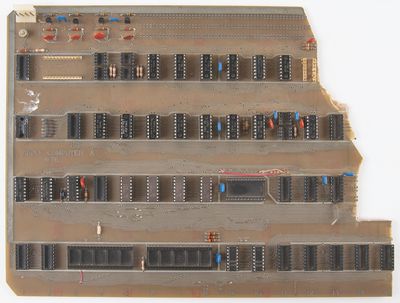 As described by RR Auctions, the website where the sale is taking place, the board is damaged.

This prototype stood on the “Apple Garage” lot for many years before it was handed over to its current owner by Steve Jobs about 30 years ago. By that time, Jobs had been ousted by Apple and was looking forward to commitments from NeXT and Pixar. The current state of the board gives a glimpse of Jobs’ judgment on it: He saw the prototype not as something to be anchored, but as something to be repurposed. Several of the ICs were pulled from their sockets, as were the microprocessor and other components, presumably for use in early Apple 1 computers.

The board appears to have been pressure damaged at the top right, resulting in a crack running from next to the power supply area down through D12 through the underside of the board to the right of A15. The missing piece was probably thrown away, but can be reinvented thanks to Paul Terrell’s photographs of the complete board. One of the distinguishing features of the prototype “Apple Computer A” was the use of three orange Sprague Atom capacitors instead of the familiar “Big Blue” capacitors used on the production Apple Computer 1.

Compared to Apple 1 production machines, the prototype is labeled “Apple Computer A”, has a different processor, and lacks the protective green coating of typical Apple 1 computers.

Due to the rarity of the prototype, RR Auction expects a high auction price despite the damage.

An original and working Apple 1 computer is being auctioned on eBay where it could fetch hundreds of thousands of dollars. The Apple 1 computer for sale is known as the “Schlumberger 2” Apple 1 and has been restored to fully working condition. As one of only dozens remaining Apple 1 computers, the device is said to integrate “almost all time-correct components” with the …

Rare check signed by Steve Jobs and Steve Wozniak, expected to fetch over $25,000 at auction

As part of a Steve Jobs Revolution collection, RR Auction is selling several rare Jobs-related memorabilia this week, including a check signed by both Steve Jobs and Steve Wozniak. Check from Apple Computer Company dated July 15, 1976 made payable to Kierulff Electronics for $3,430. The check was written the same month that Wozniak received his first…

Another rare Apple 1 computer is up for auction and this one already has a bid of over $250,000. The Apple-1 was the first Apple product created by Steve Jobs and Steve Wozniak when they founded Apple Computer and few remain. Apple 1 models that come up for auction often fetch high prices due to their rarity and this particular Apple 1 for sale is number 7…

Bonhams announced today that it will be auctioning several rare Apple device prototypes on November 3, including an unreleased VideoPad. The VideoPad was intended to be a PDA (personal digital assistant) device similar to Apple’s Newton MessagePad series, with Apple testing three versions of the device between 1993 and 1995, including the VideoPad 1, VideoPad 2 and VideoPad 3. .

Steve Jobs was posthumously awarded the Presidential Medal of Freedom

Apple co-founder and former CEO Steve Jobs was posthumously awarded the Presidential Medal of Freedom by US President Joe Biden today. In announcing the recipients earlier this week, the White House said Jobs’ inventions have changed the way the world communicates. Steve Jobs (d. 2011) was co-founder, CEO and chairman of Apple, Inc., CEO of Pixar and had a leading role in…

Steve Jobs is posthumously awarded the Presidential Medal of Freedom

Apple co-founder and former CEO Steve Jobs will be posthumously awarded the Presidential Medal of Freedom, the White House announced today. The Presidential Medal of Freedom is the highest United States civilian honor bestowed upon persons “who have made exemplary contributions to the prosperity, values, or security of the United States, to world peace, or to other significant societal…

According to John Moran Auctioneers in California (via BBC News), a rare, fully functional Apple 1 computer was auctioned this week for $500,000. The rare Apple-1 with a Hawaiian koa wood body had only two owners, a college professor and his student, to whom he sold the machine for $650. The sale included user manuals and Apple software on two cartridges. Apple co-founder Steve…

iPhone X vs iPhone 14 Pro: New features to expect if you’ve been waiting for the upgrade

Launched in 2017, the iPhone X was a significant evolution of the iPhone. The device replaced the home button and Touch ID with swipe-based navigation and Face ID while introducing new features like an OLED display, Animoji, wireless charging, and more. Even five years later, the iPhone X is still a powerful smartphone. If you kept your iPhone X and want to upgrade to…

Hands-on with the Transparent Nothing Phone 1

Every once in a while a new smartphone makes waves in the tech world because of an eye-catching design or innovative features, and this month Nothing’s Phone 1 is the star of reviews and videos thanks to its LED-loaded transparent design and affordable price. We picked up a Nothing Phone 1 to see how it stacks up against Apple’s iPhones. Subscribe to the MacRumors YouTube channel for more…

With the M2 MacBook Air now available for purchase, repair shop iFixit has made up its mind and decided to do one of its traditional teardowns on the machine to give us a look inside. A previous teardown has already revealed the biggest potential problem with the base-model 256GB M2 MacBook Air — a single memory chip, which iFixit confirms in the teardown. Instead of using two 128GB NAND memory chips…

In iOS 15.6 and the latest iOS 16 beta, Apple seems to have intentionally removed the AirTag battery indicator in the Find My app. In earlier versions of iOS, a small battery icon, similar to the iPhone battery status, appears under an AirTag’s name and location when the AirTag card is opened in Find My. Although not accompanied by a percentage, the symbol provided an approximate…