The device addresses a need in the cerebral palsy community. Often, children with cerebral palsy — a group of disorders that affect movement, balance, and posture — need daily sessions with a physical therapist to build strength and improve motor skills. As a bioengineering student at Columbia University, Shideler thought there had to be a better way.

He worked with other students to create a device that would make it easier for these children to do their therapy exercises at home or anywhere. The result was BUDI – the Biofeedback Upper-limb Device for Impairment – a bulky bracelet with sensors that track movement and provide feedback on how the user would like their movement to be adjusted.

BUDI was recognized as the Most Outstanding Design Project from Columbia Biomedical Engineering and Columbia shared the news on social media. People in the cerebral palsy community have taken notice.

“A teenager in Ohio reached out and said, ‘I have CP, I’ve seen your product and I’d like to try it,'” Shideler said.

But Shideler didn’t have any bracelets to give away. His team had only built two prototypes. Inspired by this message from someone he didn’t know who lived across the country, Shideler set out to produce BUDI on a larger scale.

Oliver Aalami, MD, who moderated the “Intro to CardinalKit” session, created the platform for projects like BUDI.

As a clinical professor of vascular surgery, Aalami often works with patients aged 65 and older who have cardiovascular disease. Years ago, he began thinking about how the data from his patients’ phones and watches — number of steps, distance and walking speed — could help predict changes in cardiovascular health.

“My question was, ‘Can we correlate changes in the signals in the data coming from these devices with something clinically meaningful?’ ‘ said Alami. “And now I’ve done several studies, starting with VascTrac in 2012.”

“I’ve been approached so many times by so many faculty saying, ‘I have an idea for an app. Can you help me build it?’” Aalami said, adding that initially he tried to help each one individually. Over time, he realized that a lower-cost, open-source framework could help researchers from any medical specialty to launch their own projects and create a minimally viable product to test, revise, rebuild, and retest .

Aalami worked with Santiago Gutierrez, then studying computer science, and Mike Hittle, a PhD student in epidemiology, to develop the CardinalKit software. The same trio was also created Biodesign for digital health.

Now health technology innovators across the country are using CardinalKit to launch new projects. By accelerating rapid prototyping of digital health applications, CardinalKit can reduce costs by up to 75% and shorten the timeframe from idea to delivery by up to a year.

In the fall of 2021, Shideler enrolled at Stanford School of Medicine with plans to start a program that would give children with cerebral palsy the opportunity to try technology to improve mobility. He received a grant from the FDA’s Pediatric Device Consortium to develop wearable devices and assistive technologies for pediatric rehabilitation.

“I learned how to create an iOS app and what to do with the available sensors on Apple Watches and iPhones,” he said. “It really clicked; Maybe BUDI could be developed as software on an off-the-shelf smartwatch instead of building bracelets and sending them to people.”

If BUDI were available on the App Store, Shideler thought, kids everywhere could have on-demand physical therapy on their wrists. It would give them some autonomy, help alleviate problems caused by the shortage of physical therapists and ease the burden on families who currently take their children to therapy every day.

Oliver Aalami, a clinical professor of vascular surgery, moderated the Intro to CardinalKit session and suggested Shideler sign up Biodesign for digital health, a course taught by Aalami. In class, students work in teams of three to identify an unmet healthcare need that can be addressed with digital solutions. Teams research and evaluate needs, brainstorm solutions, and learn to evaluate their ideas. 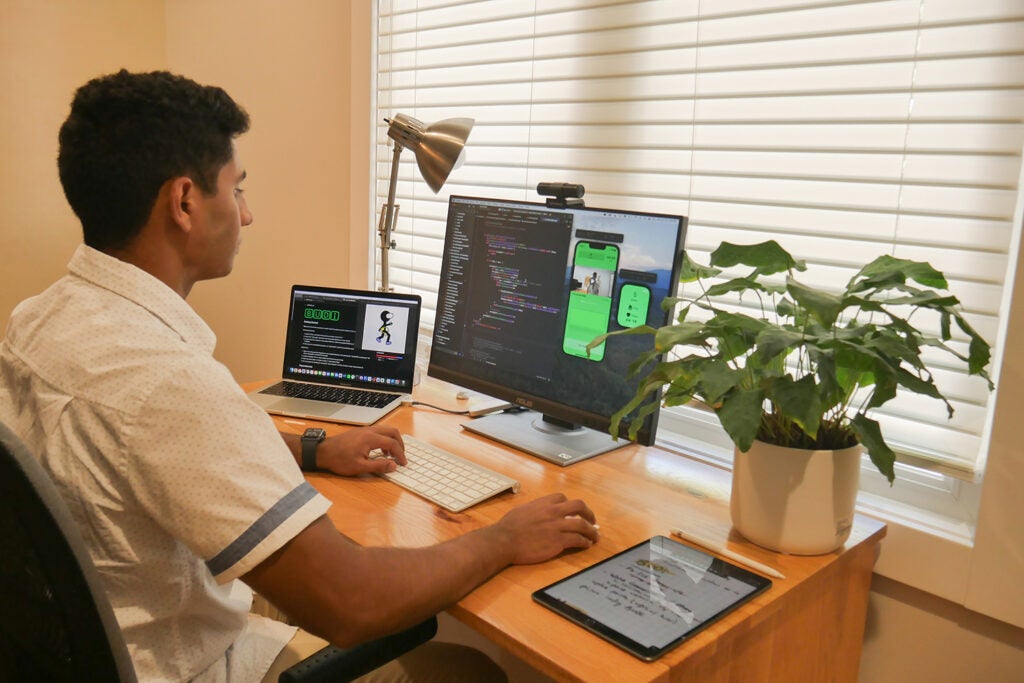 At the beginning of this course, Shideler had already surveyed children with cerebral palsy and was able to narrow his proposed solution to a technology that focused on upper body strength and dexterity, since most of the available therapies focused on walking and lower body strength. So it was only natural that Shideler would serve as a mentor for the next quarter Building for digital healtha follow-up course in which students create prototypes of their designs Biodesign for digital health.

BUDI: A new buddy for therapy

The first release of the BUDI application is a platform that allows users to follow therapeutic exercises on an iPhone while real-time motion data from a user’s Apple Watch is sent to the iPhone to provide biofeedback and create an interactive mobility training program. User data is stored in HIPAA-compliant security on Google Cloud and fully integrated with Apple Fitness to track therapy in Apple Health and see progress over time.

“Regular participation in quality therapy services is essential to maximizing the functioning of children with cerebral palsy,” said O’Malley. “Equal access (geographical, financial, social) to such services is a major barrier for many children. Blynn’s device uses easy-to-use technology to deliver a novel approach to therapy that also addresses the issue of accessibility and equity for children in need.”

BUDI also encourages communication between therapy providers and their patients, allowing pediatric users to gain autonomy in their own therapy.

“A single device that leverages modern technology while tackling gaps in equity and accessibility AND promoting user autonomy is an exciting and very welcome innovation!” said O’Malley.

And the first beta tester — the Ohio native who requested the original bulky bracelet — is ready and waiting.

“He has met with our team several times to give us feedback and even came to the presentation for our last biodesign class,” Shideler said. “We are all very happy to hand over the application to him. A long way has passed since the first bracelet. We hope that many people with cerebral palsy, or really anyone who wants to improve their flexibility and mobility, will try it and tell us how we can improve.”