Recently, one of India’s most popular consumer electronics brands, Fire-Boltt, launched a smartwatch with Bluetooth calling called the Ring Pro. The device is a capable smartwatch that has all the required fitness tracking features along with a brilliant look. However, since there are many options on the market, customers are always looking for a detailed review of such products. So here is a detailed review of the Fire-Boltt Ring Pro.

First off, the Fire-Boltt Ring Pro comes in solid packaging. Unlike other smartwatches in this segment, the Ring Pro sits directly in a long box. Removing the top portion would allow users to see the device’s face as the rest of the watch is hidden under a layer of hard paper. Overall, the packaging material and design make for a fulfilling unboxing experience.

Now let’s talk about the items that customers receive in the box. First, there’s the Ring Pro watch, along with the magnetic charger and a couple of manuals, nothing unusual. But then there are three cards in the box, including a Book My Show coupon, a three-month Gaana Plus subscription, and a Boltt Play app subscription that customers might find useful.

After examining the items in the box and picking up the smartwatch, one would realize that the Fire-Boltt has a solid construction. While the screen has a layer of curved glass on top, the case that surrounds the screen is made of metal, which increases durability. Weighing in at 50 grams, the smartwatch is lightweight which gives it a premium feel.

The Ring Pro also has a functional crown on the right side of the display that you can use to navigate the main menu or change watch faces. The bottom of the smartwatch is made of plastic and contains charging pins and openings for optical sensors. Unlike most budget smartwatches, the Ring Pro comes with high quality interchangeable straps with two free loops. In addition, the smartwatch is comfortable to wear for a whole day.

While all other aspects of the Ring Pro’s build quality are fine, the company has mentioned on its website that it can’t be used for swimming, which is odd given that the Ring Pro comes with an IP68 rating. An IP68 rating means the device can withstand damage from submersion to a depth of 1.5m for up to 30 minutes. 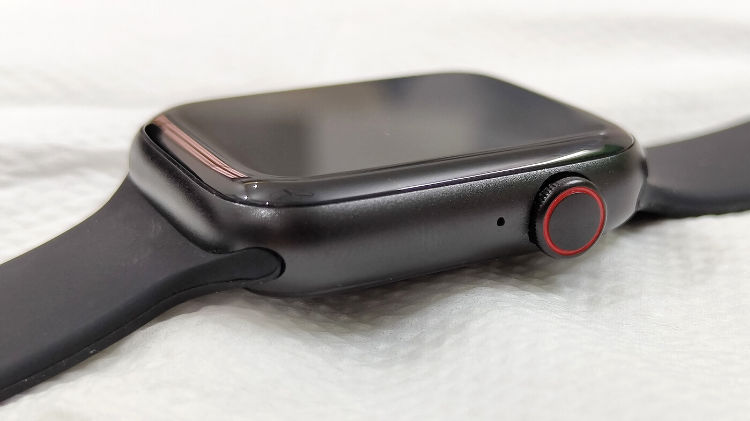 One of the key highlights of the Fire-Boltt Ring Pro is its 1.75-inch LCD with a resolution of 320 x 385 pixels. It has narrower bezels on three sides and a relatively smaller chin than other rectangular smartwatches in this segment. When setting a dark watch face, the corners of the display blend into the black bezels, making the display look larger than it is.

The display is crisp and produces vibrant colors, making colorful watch faces look great on the device. Users can change the watch face by rotating the crown on the home screen. However, if they want to try more watch faces, they need to download them through the Da Fit app. If some readers are wondering, the Ring Pro doesn’t have an always-on display. 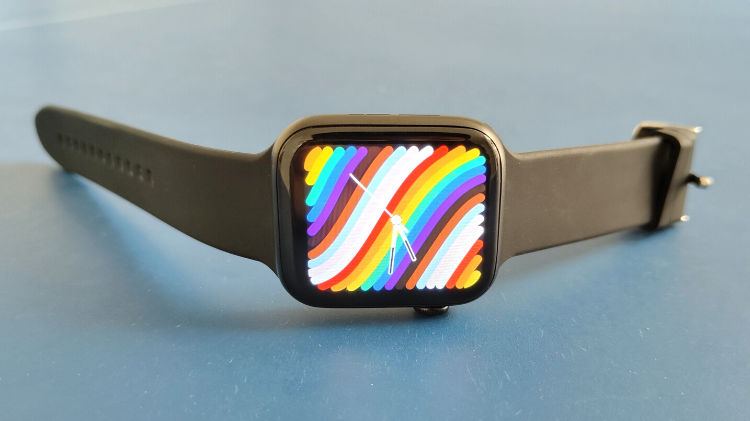 The Ring Pro is easy to use. Users can wake up the smartwatch simply by lifting their wrist or pressing the crown button. By swiping down from the top, users can access quick settings like Bluetooth connection, battery percentage, and more. If you swipe up on the home screen, the message notifications will open.

By swiping from the right side of the display, users can navigate through various smartwatch menus, including the activity menu, which shows steps and calories burned, the heart rate menu, and the training menu, which starts a workout. However, users do not get a dedicated menu for measuring SpO2. Instead, they have to tap the crown, open the main menu, and swipe down to find and select SpO2.

The Ring Pro’s most unique feature is the split-screen menu that appears on the home screen when you swipe from the left. It includes icons for the most recently accessed features on the watch and acts as a shortcut to those settings. When testing the smartwatch, the split-screen menu proved handy for adjusting screen brightness and measuring SpO2 levels.

Some features worth mentioning: 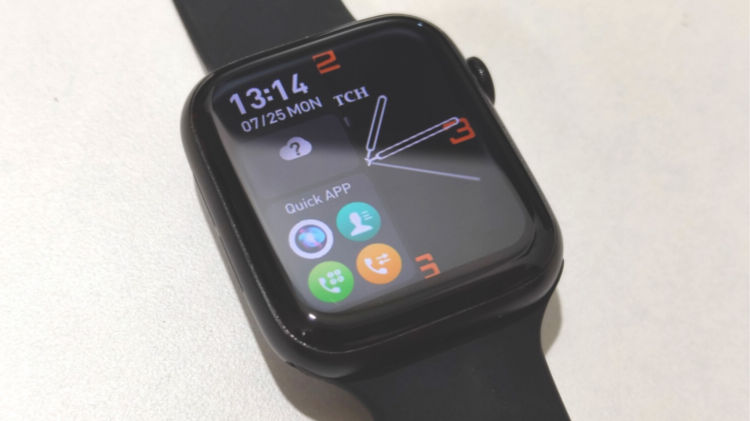 The Fire-Boltt Ring Pro is able to measure steps, calories burned, heart rate and blood oxygen levels. While it’s one of the most feature-rich smartwatches out there, it’s not among the most accurate fitness trackers. With its sensor, the Ring Pro can accurately measure SpO2 levels most of the time. However, when it comes to heart rate measurement, the results could have been better. The Ring Pro’s results differed significantly after testing the heart rate sensor alongside an oximeter.

As can be seen in the image below, the Ring Pro (middle) shows slightly fewer steps than the other two smartwatches. However, the calorie and distance counter is almost the same. 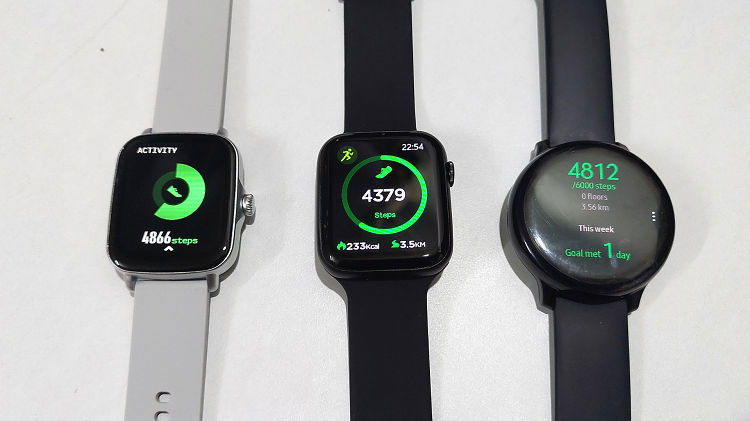 This is another aspect where the Ring Pro delivers. As such, the watch features a microphone and speaker setup that facilitates Bluetooth calls when connected to a smartphone. It has a dedicated dialer pad that allows users to dial a number manually. Also, users can save their favorite contacts on the smartwatch; However, the maximum number of contacts stored on the smartwatch is eight. Once the smartphone is connected, it will appear on the smartwatch and phone number whenever you make a call.

The call will appear along with two buttons to accept or decline. Once users answer the call, they can see the call duration, speaker volume, and an option to mute and disconnect the call. When talking via the smartwatch, the interlocutor did not complain about the call quality. The smartwatch speaker is loud and clear. The Bluetooth range of the smartwatch is around six to eight meters, if the user moves further, the Bluetooth connection between the smartwatch and the phone breaks off. 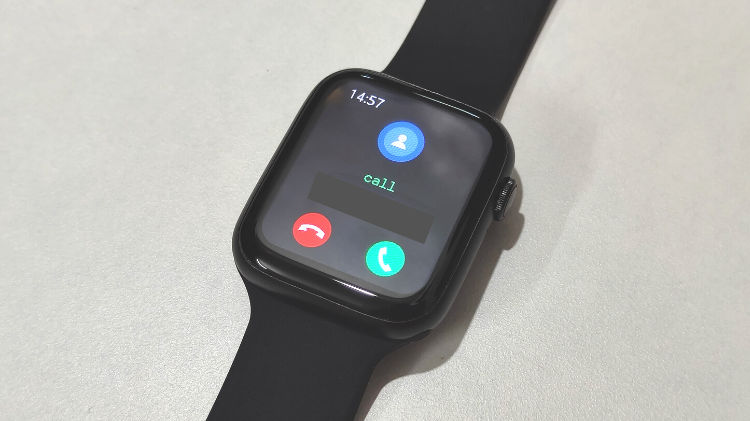 On the official website, Fire-Boltt mentions that the Ring Pro can be used for up to five days. However, the effective battery life of a smartwatch depends on usage. When testing the device, we got around three to four days of battery life with Bluetooth calls turned off. With Bluetooth calling, however, the battery life drops to just over two days. Both scenarios also include manual heart rate and SpO2 measurements.

The Ring Pro comes with a magnetic charger in the box that snaps firmly onto the charging pin on the back of the watch. When plugged in, the watch takes just over two hours to charge, similar to other smartwatches in the price range. If users want their battery to last longer, they should turn off the Bluetooth connection from the watch when not using it for calls by swiping down on the home screen, tapping the phone icon in the top right, and the center button tap. 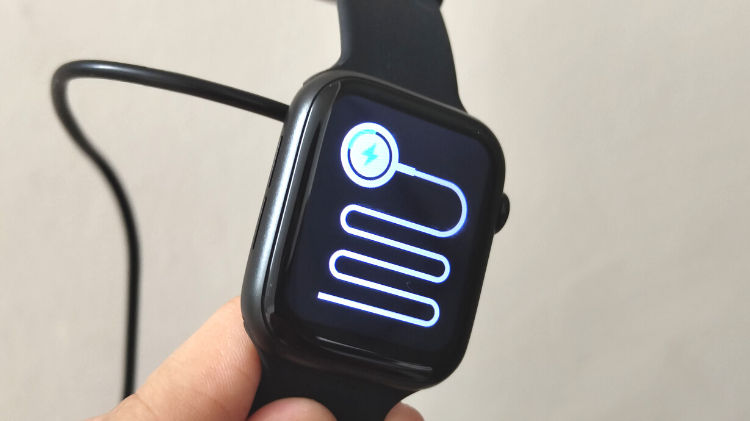 When scanning the QR code inside the watch, users will come across an app called Da Fit, which appears to be the companion app for the Ring Pro smartwatch. Installing the app is a simple process and once users open it, they need to enter some basic details like their weight and height. The app’s home screen shows the number of steps at the top, followed by sleep and heart rate measurements. If you swipe down, users will discover other metrics like blood oxygen and workout tracking. The smartwatch is compatible with Android 4.4 and above and iOS 7.0 and above.

The app lets you set different watch faces, toggle smartphone notifications, set alarms, control the mobile shutter, sync favorite contacts, and enable or disable continuous heart rate detection (which drains your battery faster). In addition, users can also enable physiological cycle reminders, which includes female cycle reminders and other features. In addition, users can also connect the app to Google Fit. The only concern here is that Fire-Boltt isn’t developing the app; It is made by Crepa as seen in Google Play Store which looks like a third party.

As of this writing, the Fire-Boltt Ring Pro is available on Amazon for Rs. 3,499. Also, a Rs. 500 coupon brings the effective price of the smartwatch down to Rs. 3,000. At this price, the Ring Pro competes with boAt Blaze and Zebronic’s Zeb Fit. While Blaze doesn’t offer Bluetooth calling, the Zeb Fit does come with this feature. The company also offers a one-year warranty and some freebies in the box. Therefore, it’s safe to say that the Ring Pro offers enough features for its price. 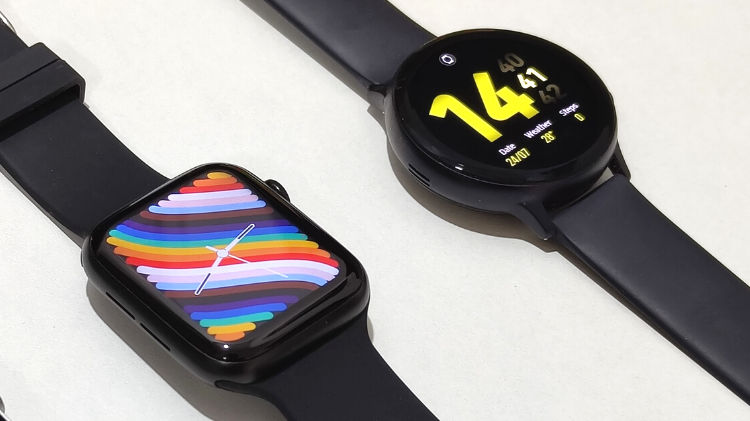 Now that we’re done with the entire review, it’s safe to say that the Ring Pro is a decent watch for its price. It has all the features you need, including heart rate tracking and SpO2 measurement. But what sets the Ring Pro apart from other smartwatches in price is its looks, as it’s inspired by one of the most popular smartwatches of all time – the Apple Watch. So if someone wants a smartwatch that looks premium and is reasonably accurate when tracking fitness-related metrics, the Fire-Boltt Ring Pro is an easy recommendation.