Where can Better call Saul go after last week’s groundbreaking episode? Apparently back to black and white Omaha.

Monday’s episode was all about Gene Takavic finally giving us an update on Saul’s post-breaking Bad Identity. Last we saw Gene (in the season 5 premiere), he was shadowed by a mysterious guy named Jeff, but he told cleaner Ed Galbraith he would “fix it himself”. Now we see what that looks like: Gene tracks down Jeff’s elderly mother, Marion – hi, Carol Burnett! — and insinuates her with a made-up story about his missing dog named Nippy. (He also secretly cuts a cable in her scooter so he has to help her home.) When Jeff comes home from work, he finds Gene laughing at himself with Marion in their kitchen – and Gene throws a punch at a confused Jeff smug look at .

Once they’re alone, Jeff threatens Gene, “All I have to do is pick up the phone and it’s bye-bye, Saul Goodman.” But Gene has a better idea: He knows that everything Jeff wants a bigger piece of the pie, and he promises to cut it off for him. “Here’s the deal: I’ll show you the game and then we’re done,” he tells Jeff – and a new scam is born. (Gene goes home and puts on his little Saul Goodman ring to complete the transformation.) Gene begins taking some extra Cinnabons to the mall’s security office, which lead guard Frank – hi, parks and recis Jim O’Heir! — eats happily with his back to the monitors. Gene accurately measures how long it takes Frank to finish his bun each time, and he also browses Lancaster’s in the mall, counting his steps as he goes. What is this guy up to?

We find out when Gene sets up an exact replica of the department store’s dimensions in a snowy field and trains Jeff to steal the most expensive items while Frank takes more than three minutes to eat his cinnabon. But only take three of each item, Gene Jeff warns: That way, they won’t notice until they take inventory in three days, by which time the security tapes will be taped over. Jeff isn’t sure about the plan, which sounds crazy to him. So Gene cites Walter White’s story: “I’ll tell you what’s crazy: A fifty-year-old chemistry teacher walks into my office. The guy is so broke he can’t pay his own mortgage. A year later he has a pile of cash the size of a Volkswagen. That’s crazy.” That’s enough to convince Jeff to take the plunge. 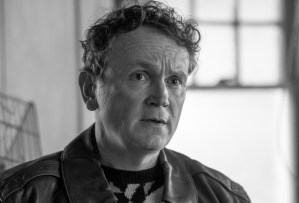 The Lancaster’s manager, Kathy, is doing a morning tour and notices a scratch on the floor when she is interrupted by a delivery of a huge wooden crate. She didn’t order it, so she calls the supplier’s manager – ie Gene – to complain. Gene starts off with a long story about how long it would take him to pick her up, so Kathy reluctantly agrees to leave the box there overnight. Now the stage is set, and as Frank digs in his cinnabon as usual that night, Gene texts Jeff that it’s time. Jeff emerges from the box and runs around the store, grabbing Armani suits and Air Jordans just like they practiced. Gene looks over Frank’s shoulder while Frank forgetfully talks about Nebraska football and everything is going according to plan… until Jeff runs onto the newly cleaned spot where the scratch was, slips and passes out. uh-oh

Gene can only watch in horror as Jeff lies motionless on the tile and Frank empties his cinnabon. He wants to turn back to the cameras, but Gene stops him by breaking out in sobs and crying that he doesn’t know what he’s doing with his life. Frank has a wife to go home to, but “I don’t have anyone. My parents are dead. My brother is dead. I have no wife. No children. No friends. If I die tonight, no one would care.” (Wow… that hits hard because I know how true it is for Jimmy after what happened with Chuck and Kim.) Frank comforts him warmly and it gives Jeff time to get to his feet and stagger out of frame before Frank gets back to work. Furious. The next morning, Jeff sneaks out of the store after hiding in the bathroom all night, and a delivery man picks up the box, now full of luxury goods.

Back in his garage, Jeff and his friend giggle at their newfound riches, but Gene doesn’t laugh. He reminds them that if caught, they face several decades in prison, and if they turn against him, he will betray them. “You don’t have to threaten us. We’re all friends here,” Jeff insists, but Gene is adamant, “I’m not your friend.” He warns her not to try anything like that again and to stay out of his life from now on, and orders Jeff to use the words to say, “We’re done.” Marion almost catches her, but they pretend to be working on Jeff’s car and Gene helps her with her groceries, with Marion telling him that Jeff ran into a bad crowd in Albuquerque , but she’s glad Gene is a good influence. She asks about Nippy and Gene says he got him back: “After all that, a happy ending.”

Gene is back at Cinnabon and looking more confident than we’ve ever seen him. He takes his lunch break and walks over to the department store, where he looks at a brightly colored shirt and tie that Saul Goodman would like. He holds it up in front of him in the mirror… but he eventually puts it back and walks away.

Are you happy with how Gene’s story ended, if that’s the end? And when will we see Walt and Jesse – and maybe even Kim again – in the final three episodes? Write your thoughts in a comment below.