Updates to the Files app in iOS 16 and iPadOS 16 bring it closer to the macOS Finder. Here’s what’s new.

The Files app brings basic file management features to iPhone and iPad. While it’s not as robust as the Finder on the Mac, it can do most of what a user needs to manage files.

Files started out seeing everything stored in iCloud Drive, then expanded to third-party cloud services like Dropbox, and finally ended up with local and network storage options. Now the feature set has been expanded again with some much-needed updates to navigation and file controls in iOS 16 and iPadOS 16.

Most of the changes made to the Files app focus on making interaction paradigms similar to macOS for better ecosystem parity. These new updates make it easier to find, edit, and organize files.

Save, open and transfer functions

The Save to Files feature has been improved with a new modal window. Every time a user saves something in the Files app, the entire app interface is presented with options to choose the save location, add a tag, and rename the file.

Opening files with third-party apps will get a similar UI if the developer properly chooses the Files app as the save location. The modal window shows the full navigation UI for finding a file, including the new navigation options described below.

When moving a file to another location, e.g. e.g. from one cloud service to another or to an external SSD, a file transfer progress bar is displayed.

Apple has enhanced the list view with better organization controls. The file or folder is shown on the left, as usual, with the modified date and file size on the right, with blue column headings. 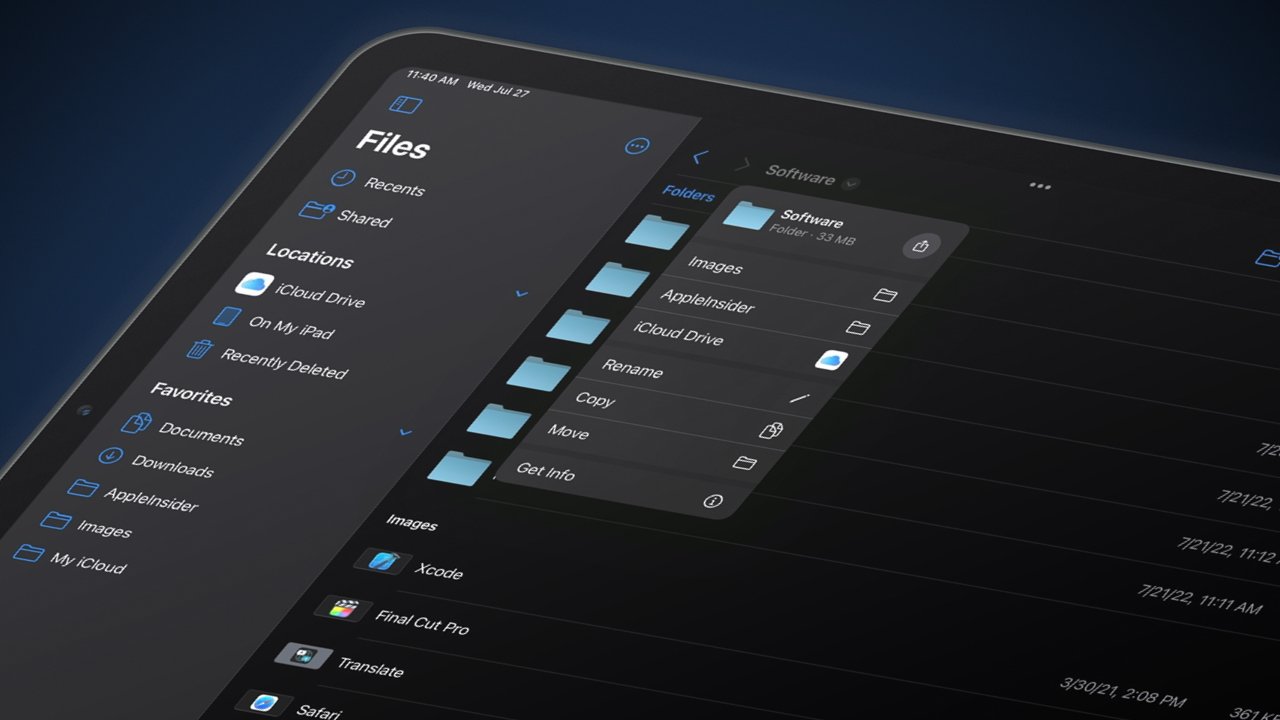 Tap a column title to organize the list by that data point, and tap again to reverse the order. Grouping by file type, date, size, or who shared it gives more organization options.

The navigation bar has also received a small but welcome change. Instead of showing the parent folder or the previous folder in the top left, the Files app now shows forward and back arrows next to the current folder name.

Tapping the folder name opens a navigation view of recent folders and offers some control options like renaming, copying, and moving. 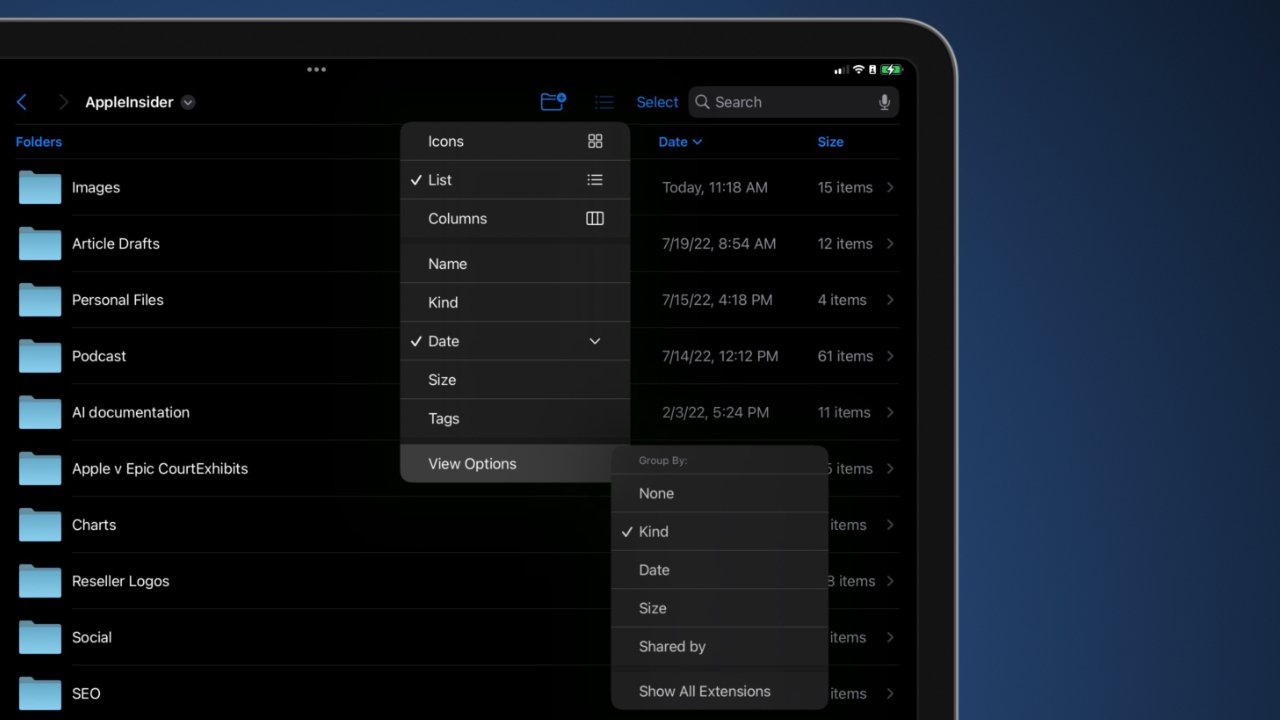 Selecting “View Options” from the View menu reveals the “Group By” options for a specific view mode, as well as a “Show All Extensions” button, which we’ll discuss below.

When interacting with a file, a handful of new interactions are available depending on the file type and context. These will be hidden under the “right click” or hold down menu.

Using “Get Info” on folders now shows the size of the folder contents. So far, no data on size has been displayed here. Also, the Where section shows the file structure leading to the selected file or folder. 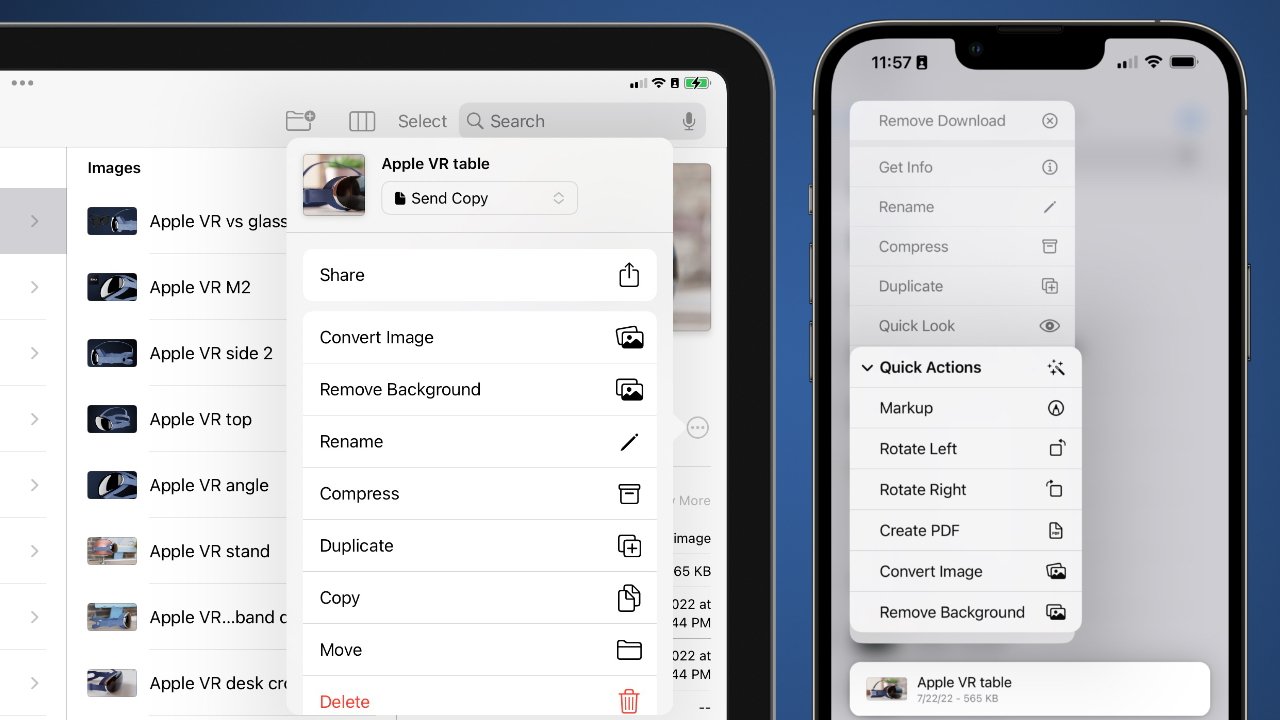 New quick actions appear in the menu when selecting certain file types. For example, quick actions for images include rotating the image, converting it to PDF, or removing the background.

If Remove Background is selected, a new PNG image will be saved with the object in the same folder.

The column layout provides a hybrid view of information and action buttons typically found when an image or file is selected in the file selection menu. The hamburger button displays additional file actions similar to those previously listed.

Some actions can also be performed with multiple files selected. For example, select multiple image files to add them all to one PDF file that is saved separately.

Other batch operations include changing file extensions, removing backgrounds from all selected images, or creating a new folder with the selected items. However, the Files app cannot batch rename files.

File extensions tell you what type of file you are dealing with, e.g. B. An image file could be JPEG, PNG or HEIF. Users can now freely convert an image between these extension types using the Convert Image action in the quick action menu. 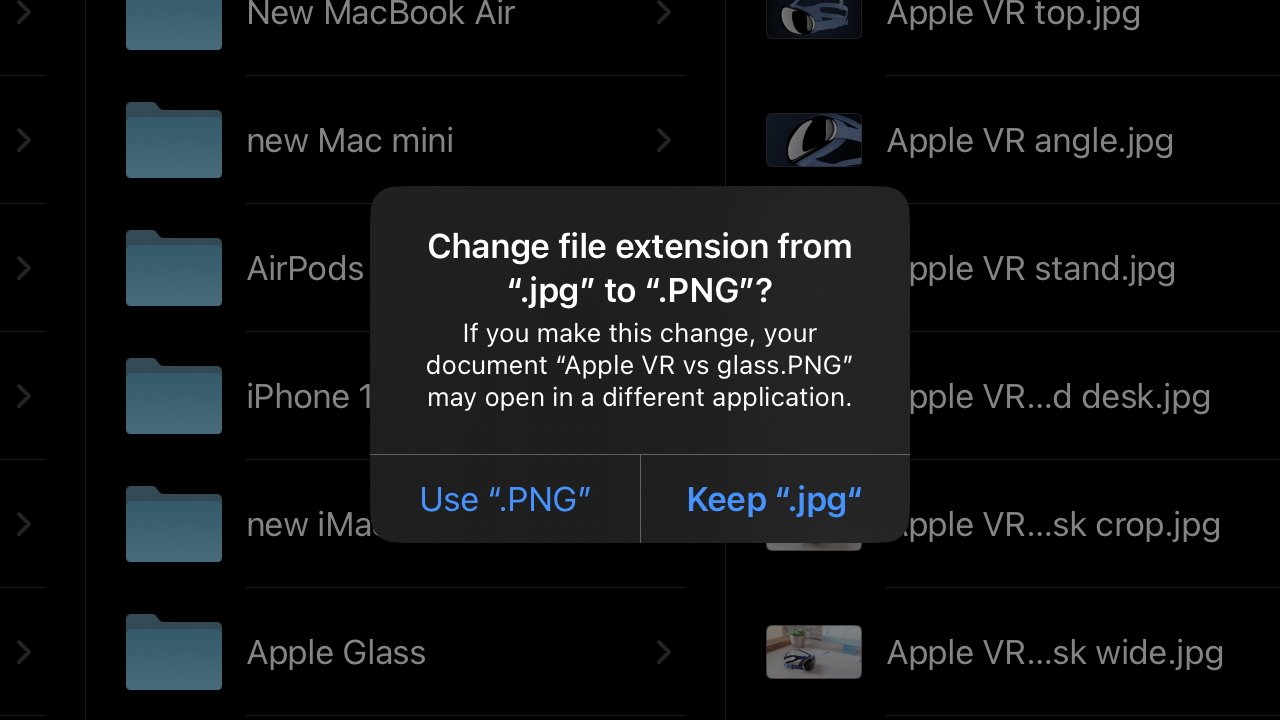 Advanced users use the Show All Extensions toggle in the layout menu to show the file extension after the filename. With this enabled, simply rename a file and change the extension shown after the period to actually change the file type.

Be careful when making file changes this way. Some file containers contain additional information such as location, tags, or notes that are not displayed in a new file type.

The iPhone and iPad are fundamentally different computing platforms than the Mac, so users shouldn’t expect Files to have feature parity with the Finder. One of the key differences between the two is system file access.

On Mac, users can delve into hidden file structures and change program files for installed applications or even system files that are essential for the normal operation of the operating system. On iPad and iPhone, users only have access to user-generated files.

Apple hasn’t opened that up at all, and users shouldn’t expect that philosophy to change any time soon. Instead, files updates focus on quality of life improvements that make file management easier.