ATHENS, Ga. — This time last year there was reason to look to Georgia and think a special season might be underway for the reasons that made it so. And because it was, the feeling when Georgia starts preseason training is…

Well, that’s hard to say: what now? let’s do this again The feeling among fans and followers probably varies from person to person, but the sense of urgency, the championship-or-bust mentality, those thoughts are certainly gone.

But within the program, Kirby Smart is aiming for a sort of business as usual. He’s been through that before in Alabama, which defended his title three times while Smart was there (not counting the fourth because Smart went to Georgia). The natural transition in college football makes it easier for a team to feel like a fresh start, Smart has pointed out.

“The biggest thing is that everyone keeps saying, ‘You’ve won a national championship. Are you worried about complacency?’ Well, the guys who’ve won it are mostly at NFL camps,” Smart said. “So there are a lot of hungry guys on our team. I’d be more concerned about complacency if you had, you know, I don’t know, 15 starters back from 22, if you had 12 or 13 starters back from 22.

The exact number is 11 returners, at least from those who started in the national championship game. There are 23 other players who have appeared in the game, including a handful who are expected to play key roles. So it’s not like it’s a complete rebuild.

But there are enough gaps to fill, and enough talented newcomers and others who haven’t played much to make this preseason intriguing.

Let’s quickly ditch a few names: Jalen Carter is in for a big season, but he’s had an offseason full of hype. Arik Gilbert is back after a year’s absence and has already shown what he can do at LSU. Kelee Ringo, Nolan Smith and Warren McClendon were all preseason All-SEC first-team picks. And while Stetson Bennett appears to have yet to earn a lot of respect, he’s the reigning offensive MVP of the national championship and the Orange Bowl.

The veterans who could “break out” this season, according to the definition we use here, are returning players who are poised to have a bigger impact than might be expected, either as stars or contributors:

Jamon Dumas-Johnson, centre-back: This sophomore made a lot of noise during the off-season in Athens, but he’s not well-known at the SEC yet. This is about to change soon. It’s saying something that after just a year on campus, he’s already established himself as a starter while other five-star prospects are battling for spots.

Dominick Blaylock, recipient: For all the (deserved) hype surrounding the tight ends, the receiving corps isn’t empty, and if Blaylock returns to his old form it would be a game-changer on offense. Of course, that old form was in 2019, before the first of his two ACL injuries. However, all the omens in spring were very good.

AD Mitchell, recipient: Speaking of which, Mitchell’s return doesn’t get enough mention. There’s also Ladd McConkey, Marcus Rosemy-Jacksaint, Kearis Jackson, and Arian Smith, so the receiver room is fine. But Mitchell is the one you might see as an all-SEC type breakout along with Blaylock.

Zion Logue, nose device: Carter’s impact this season may depend on enough players around him stepping up their game enough so that Carter isn’t the focus of opposing blocking schemes. Logue, a fourth-year junior, had a good spring.

Devin Willock, Guard: The identity of the two starting guards is the biggest uncertainty on the offensive line. Tate Ratledge’s health is a big part of this: the redshirt newcomer is free, but Smart has downplayed that, pointing out that Ratledge’s type of foot injury will take time to fully recover. Xavier Truss, a converted tackle, will also be a factor along with Warren Ericson who seems like he’s been around forever. But Willock, a redshirt sophomore, has been making waves at the practice for more than a year.

Broderick Jones, tackle: McClendon was a first-team All-SEC preseason pick, while Jones didn’t even make the third-team. This is understandable given that voters rely on recurrent experience. But Jones emerged after Ericson was injured in the national championship and you could see the five-star prospect explode this year.

Kamari Lassiter, cornerback/nickelback: Ringo will start at a cornerback spot, but the other spots are wide open with too many candidates (veteran and rookie) to name them all. Someone will show up, and Lassiter was the first teamer on G-Day, whatever that’s worth. Two other sophomores Javon Bullard and Nyland Green could push him forward, and veterans like William Poole and Tykee Smith (if healthy) will be factors. But Lassiter has perhaps the biggest advantage.

Kenny McIntosh, Kendall Milton, Daijun Edwards, Jam: Chances are this trio will share enough carries that no Georgia player will break 1,000 rushing yards for the third straight season. But if there’s an injury or two, you could see these guys, especially McIntosh or Milton, become a force. As explosive as the passing game should be this year, it’s still Georgia, and it’s still Smart’s team: The Bulldogs will be running the ball a lot. 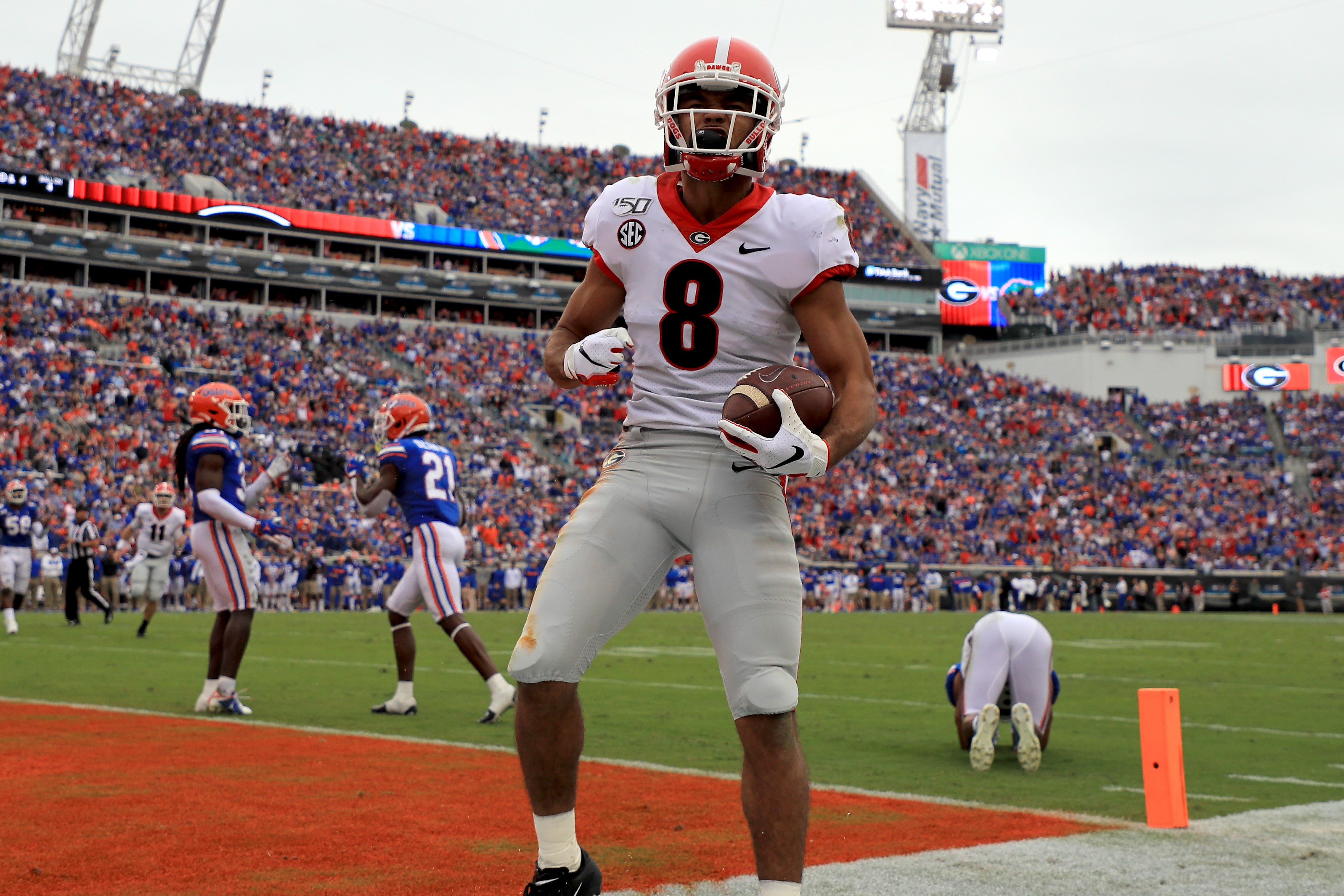 This is not a comprehensive list of every real freshman in Georgia; They’re all worth seeing because they’re all new, and there were enough Jordan Davises and AD Mitchells to remind us that stardom doesn’t always equal immediate impact. This class is strong enough overall that anyone could have a bigger impact than expected, which is another way of saying you’ll be wondering why (insert newcomer’s name here) isn’t mentioned. Objection noted in advance.

But just looking at immediate needs and other factors, here are a few that are on my mind as preseason begins:

Mykel Williams, defensive end: Typically this time of year, Smart talks about the learning curve or maturation process for true freshmen, particularly five-star prospects, whom he might want to discourage from getting cocky. But when asked about Williams at the SEC media days, Smart gushed about all the extra work Williams put in: “I look out my window and I see him out there doing an extra after every practice, the other day on a Sunday went from work and he’s out there hitting a sled on Sunday. So folks, when you have a rookie that’s out there alone on Sunday, on grass, 115 degrees out there, and he’s hitting a sled out there, it’s special and he’s talented. I’m happy for him.”

Marvin Jones Jr., full-back: He only signed up over the summer, so it’s almost forgetting that Georgia is adding a five-star edge rusher. Between Nolan Smith, Robert Beal, MJ Sherman and Chaz Chambliss there is a lot of experience ahead of him. But if Jones develops quickly, he could force his way onto the field.

Malaki Starks, Security: Georgia has two experienced safety guards in Christopher Smith and Dan Jackson, and they could be good enough to anchor the back end all season. But Starks was also a five-star recruit for a reason.

Jaheim Singletary, Daylen Everette, Julian Humphrey, cornerbacks: Refer to the void in cornerbacks, nickel backs, and dime backs. And note that Georgia has three freshmen who were among the top 100 recruits overall, with Singletary and Everette both being five-star prospects.

De’Nylon Morrissette, Chandler Smith, Receivers: These two were further down the rankings (No. 231 and No. 234 respectively). But they offer the speed Georgia is looking to build into its lineup.

Bear Alexander, defender: The depth along the Georgia line is pretty strong, but Alexander was a top-50 recruit for a reason. How fast does he break into the two deep and how many snaps does he get?

Branson Robinson, traffic jam: This season may not be as much about carries, with the aforementioned trio of veterans ahead of him. But with Georgia now struggling to get a jam in the 2023 class, the future of the jam position will feel a lot brighter when Robinson sees the portion of his top 100 ranking.

Brett Thorson, punter: It’s not clear how much Georgia will have to sting this year, but when it does, it will be done by an Aussie with a catchy name, which is intriguing enough.